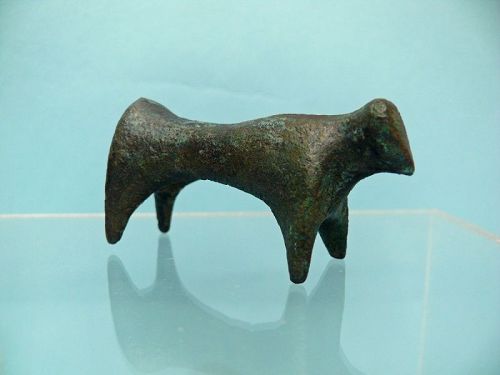 Please refer to our stock # 3342 when inquiring.
Click to view additional online photographs

Greek, Geometric Bronze Bull, 1st Century BCE. 1 1/2" x 3" x 1". Ex: B. Rhodes collection, FLorida. The roots of Classical Greece lie in the Geometric period of about ca. 900 to 700 B.C., a time of dramatic transformation that led to the establishment of primary Greek institutions. The Greek city-state (polis) was formed, the Greek alphabet was developed, and new opportunities for trade and colonization were realized in cities founded along the coast of Asia Minor, in southern Italy, and in Sicily. With the development of the Greek city-states came the construction of large temples and sanctuaries dedicated to patron deities, which signaled the rise of state religion. Each polis identified with its own legendary hero. By the end of the eighth century B.C., the Greeks had founded a number of major Panhellenic sanctuaries dedicated to the Olympian gods.
Similar Items from this seller