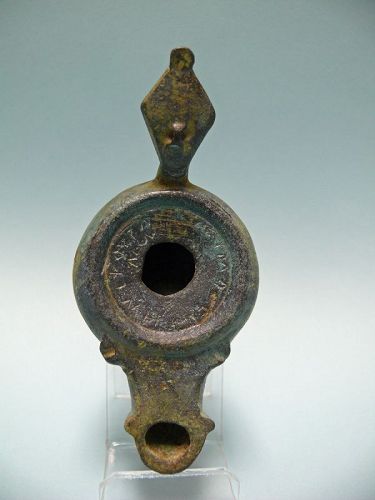 Please refer to our stock # 3320 when inquiring.
Click to view additional online photographs

Roman Bronze Oil Lamp with Greek Inscription, ca 1st - 2nd Century CE. 1 1/2" x 4" x 2". With repair to nozzle as seen in images. Otherwise in excellent condition. Ex: Archaeological Center, Tel Aviv. Some of the earliest lamps, dating to the Upper Paleolithic, were stones with depressions in which animal fats were likely burned as a source of light. Shells, such as conch or oyster, were also employed as lamps, and even may have served as the prototype for early lamp forms. Clay lamps appeared during the Bronze Age around the 16th century BC and were ubiquitous throughout the Roman Empire. Initially, they took the form of a saucer with a floating wick. Lamps also began to show signs of experimentation with changes in overall body shape and the addition of multiple nozzles, a handle, and clay slips, a coating that was applied to the outside of clay lamps during production in an effort to prevent oil from seeping through the porous clay. These technological advances have been accredited to the Greeks, whose lamps were exported all over the Mediterranean between the sixth and fourth centuries BC due to their high quality of craftsmanship.