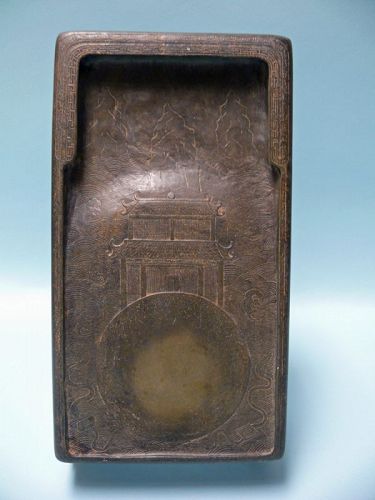 Please refer to our stock # 3222 when inquiring.
Click to view additional online photographs

Signed and Dated, Qing Dynasty Scholar's Ink Stone with motif of Chinese Temple and Landscape, Shanxi Province. Chinese calligraphy translates to "Strength and Self Confidence." Intact and in excellent condition. 10" x 5 1/2" x 3". Ex: Lovell Hall, Portland, Maine. The inkstone is Chinese in origin and is used in calligraphy and painting. Extant inkstones date from early antiquity in China. The device evolved from a rubbing tool used for rubbing dyes dating around 6000 to 7000 years ago. The earliest excavated inkstone is dated from the 3rd century BC, and was discovered in a tomb located in modern Yunmeng, Hubei. Usage of the inkstone was popularized during the Han Dynasty. Stimulated by the social economy and culture, the demand for inkstones increased during the Tang Dynasty (618–905) and reached its height in the Song Dynasty (960–1279). Song Dynasty inkstones can be of great size and often display a delicacy of carving. Song Dynasty inkstones can also exhibit a roughness in their finishing. Dragon designs of the period often reveal an almost humorous rendition; the dragons often seem to smile. From the subsequent Yuan Dynasty, in contrast, dragons display a ferocious appearance. The Qianlong Emperor had his own imperial collection of inkstones cataloged into a twenty-four chapter compendium entitled Xiqing yanpu (Hsi-ch'ing yen-p'u). Many of these inkstones are housed in the National Palace Museum collection in Taipei. Books and scholarship on the various inkstones of China existed chiefly in Japan, where a long bibliography on the subject exists. Inkstones should be appreciated in the context of the traditional scholar's studio culture and the appreciation of furnishings, antiques, paper, seals and all other associated objects. Members of the Chinese literati, such as the Song Dynasty's Ouyang Xiu, contributed greatly to this new culture.