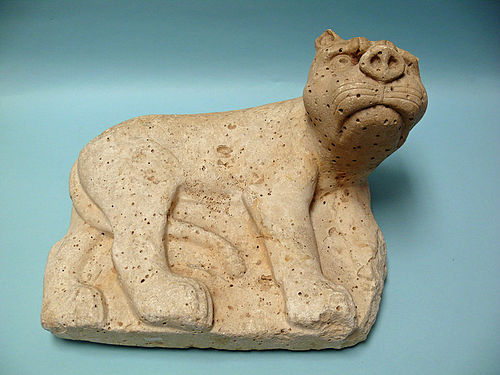 Please refer to our stock # 3202 when inquiring.
Click to view additional online photographs

Guest Book
$750.00
Large and heavy Sasanian Recumbent Pitted Stone Lion, ca. 5th - 6th Century CE. Stylized lion lying on one side with tail between legs. Pleasing smile with flared nostrils. Note Some repair and Head is Contemporary reconstruction, left ear broken. Fissure encircling neck probably due to reconstruction. 10" high x 17" wide x 12" deep. Heleanor Feltham writes in her paper "Lions, Silks and Silver, The Influence of Sasanian Persia," The Sasanian Empire (224–637 CE) was founded by Ardarshir I, who claimed descent from the old Achaemenid rulers of Persia. With popular support, he spearheaded a movement to restore Iranian rule after several centuries of first Seleucid Greek and then Parthian rule. Under Ardarshir and his successor, Sharpur I, the Sasanian empire re-expanded to include most of Central Asia and areas of North India, countries such as Sogdia and Bactria once again becoming satrapies, semi-independent regions that retained local traditions, trade, and often dynasties under the rule of a centrally-appointed satrap. For most of the four hundred years of Sasanian rule, the Persians were the dominant culture of the Silk Road. Their style, expressed through key trade items and diplomatic gifts, especially the silks and metal wares produced in the imperial workshops became a visual lingua franca, found dispersed from Japan to Europe. The lion, symbol of kingship, power, prestige, and protection of sacred spaces, was a dominant motif on both silverware, silks, and stone, either as the dying lion which confers status on its royal hunter or as the guardian lion of the empire.