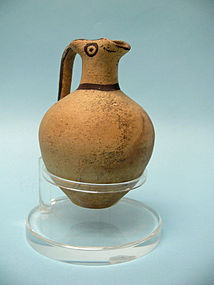 Please refer to our stock # 3006 when inquiring.
Click to view additional online photographs

$625.00
Cypriot, Cypro-Archaic I Trefoil Zoomorphic Oinochoe, ca. 750 - 600 BCE. Small wine jug with ring around neck and circular eyes painted on either side of trefoil mouth. Intact and in excellent condition. 4 3/4" high. According to the Heilbrunn Timeline of Art History, a stele found at Kition reports the submission of the Cypriot kings to Assyria in 709 B.C. Under Assyrian domination, the kingdoms of Cyprus flourished and Cypriot kings enjoyed some independence as long as they regularly paid tribute to the Assyrian king. A seventh-century B.C. inscription records that there were ten kings of Cyprus who ruled over ten separate kingdoms. Some of these kings had Greek names, others had names of Semitic origin, testifying to the ethnic diversity of Cyprus in the first half of the first millennium B.C. Royal tombs at Salamis suggest both the wealth and foreign connections of these rulers in the eighth and seventh centuries B.C.