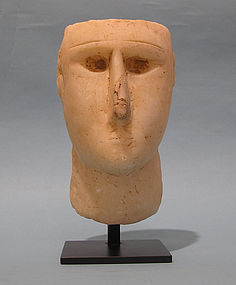 Please refer to our stock # 2019 when inquiring.
Click to view additional online photographs

Sabaean, South Arabian Alabaster Male Portrait Head with flat, rectangular top and back. Recessed eyes to accept inlays, arching incised brows, long triangular nose and small mouth. Such sculptures are among the most familiar and most highly prized products of the South Arabian fringe, the area which now lies within Yemen. Circa 1st Century C.E. 8" high. Nose repaired but otherwise in excellent condition. (see Sotheby's Antiquities NY, 10 Dec 2008, lot 64, Sold for $10,625 USD)Ex: Windsor Antiques, New York. The Sabaean people were South Arabian people. Each of these had regional kingdoms in ancient Yemen, with the Minaeans in the north in Wādī al-Jawf, the Sabeans on the south western tip, stretching from the highlands to the sea, the Qatabānians to the east of them and the Ḥaḑramites east of them. The Sabaeans, like the other Yemenite kingdoms of the same period, were involved in the extremely lucrative spice trade, especially frankincense and myrth. Some scholars suggest a link between the Sabaeans and the Biblical land of Sheba.