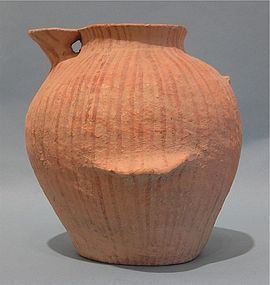 Please refer to our stock # 1991 when inquiring.
Click to view online photographs

Line painted Early Bronze Age I spouted vessel with side flanges. Ovid body with tapering small flat base and raised rounded rim. Circa 3100 - 1850 B.C.E. Found in the Holy Land. 8 3/4" high. Some wear due to age, but in very good condition. Ex: Tarshish Gallery, Israel. The Early Bronze Age I is marked by rural proto-urban (unwalled) cities. The EB I is continuous with the Chalcolithic, especially in the north. Houses are mostly either: apsidal, with a curve at one end; ellipsoidal, with both ends curving; or, occasionally, caves. Burial customs included: caves, most commonly; shaft tombs; charnel houses, where bodies were laid out like in a tomb; nawamis, field stone chambers which still stand in the Sinai today; and cremation. The Canaanean Blade first appeared in the EB I, a blade with a trapezoidal cross-section. Later in the Early Bronze Age I, Egypt begins interacting with the Negev, South Coast and Sinai. There were regional ceramic families. A notable site is Bab edh-Dhra, inhabited from 3100 - 2000 BCE.
Similar Items from this seller