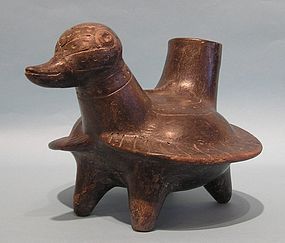 Please refer to our stock # 1965 when inquiring.
Click to view online photographs

$950.00
Colima Pottery Blackware Duck Vessel, Mexico, ca. 100 BCE - 250 CE. Colima Blackware Potery Duck, Mexico, ca. 100 BCE - 250 CE. Finely modeled with long bill, small eyes staring outward. Stylized plumage and large hollow tail for spout. 6 3/4" high. Some stable, hairline cracks in cylindrical opening, but in good condition. Ex: Lands Beyond, New York. The name Colima comes from the Nahuatl word 'collimaitl', with 'colli' meaning 'ancestors or gods' and 'maitl' meaning 'the domain of...'. The Colima territory became a state in 1857, the capital city is located inland on Hwy 110, at an elevation of approximately 500 meters (1650' feet). The Otomi, Nahuatl, Tolteca, Chichimeca and Tarasca cultures flourished here between 2000 BCE and 1000 CE. According to legend, the beautiful crystalline waters from the rivers and lakes of Colima are protected by the 'chanos', or 'chaneques' (spirits or elfish creatures), these deities of the waters are related to the Aztec god of rain and fertility, Tláloc ('he who makes things sprout'). When the Spanish arrived to conquer Colima in 1522, but King Rey Colimán (Colimotl Hueytlatoani), recognized the threat presented by the conquistadors and resisted their advance into his empire. The indigenous forces initially won their battles against a surprised Spanish army, but in 1523 they lost a decisive battle in Caxitlán, sending the armies of King Colimán to defeat. The land was then divided into parcels, today these areas are known as Minatitlán, Comala, Coquimatlán and Conde de Terreros. In 1540, the Spaniards constructed a royal road between Colima and Mexico City. This new route quickly turned Colima into a vital center for trade and commerce, with the port of Manzanillo centrally located on the Pacific coast, playing the key role in transporting goods from México to the King of Spanish. Colima has two volcano peaks: Nevado de Colima (4,330 meters), which is the oldest and inactive, and 5 km to the north a the very active 3,860 meter tall Volcán de Colima (also known as Volcan de Fuego. Colima's volcano has been active for about five million years, since the late Pleistocene era, where huge landslides occurred on the mountain, with approximately 25 km of debris traveling westward for over 120 km, all of the way to the Pacific Ocean.