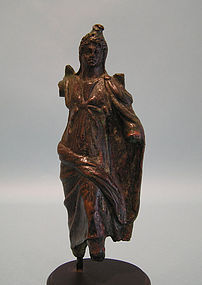 Please refer to our stock # 1924 when inquiring.
Click to view additional online photographs

Roman Bronze of Mood God named Men, of Anatolia. ca. 1st Century BCE - 1st Century CE. Sculptural depictions of the Moon god of Anatolia called "Men" are extremely rare. The god wearing a Phygian cap and clad in layered chiton, standing with weight on right leg and left leg elevated. Head slightly angled downward. Circa 1st Century B.C.E. - 1st Century C.E., Bronze is 5 3/4" high. Loss to limbs but otherwise in excellent condition. Rare find. Mēn (Greek Μήν "month; Moon", presumably influenced by Avestan måŋha) was a lunar god worshiped in the western interior parts of Anatolia. He is attested in various localized variants, such as Mēn Askaenos in Antioch in Pisidia, or Mēn Pharnakou at Ameria in Pontus. Mēn is often found in association with Persianate elements, especially with the goddess Anahita. Lunar symbolism dominates his iconography. The god is usually shown with the horns of a crescent emerging from behind his shoulders. Strabo describes Mēn as a local god of the Phrygians. Mēn may be influenced by the (feminine) Zoroastrian lunar divinity Mah, but his male sex is apparently due to the Mesopotamian moon god Sin. In the Kingdom of Pontus, there was a temple estate dedicated to Mēn Pharnakou and Selene at Ameria, near Cabira (Strabo 12.3.31). The temple was probably established by Pharnakes I in the 2nd century BCE, apparently in an attempt to counter-balance the influence of the Moon goddess Ma of Comana. The cult of Mēn Pharnakou in Pontus has been traced to the appearance of the star and crescent motif on Pontic coins at the time.