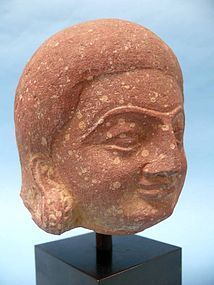 Please refer to our stock # 1901 when inquiring.
Click to view additional online photographs

Mathura Red Sandstone Head of a Man, India, Kushan Period, ca. 1st - 3rd Century. Very finely modeled with ovoid face and gently rounded chin. Sharpened nose and pursed lips. 4" high x 4" wide x 4" deep. On stand height is 7". In excellent condition. Artifact is lobed / flat on back of head. Mathura has an ancient history. According to the Archeological Survey of India plaque at the Mathura Museum, the city is mentioned in the oldest Indian epic, the Ramayana. In the epic, the Ikshwaku prince Shatrughna slays a demon called Lavanasura and claims the land. Afterwards, the place came to be known as Madhuvan as it was thickly wooded, then Madhupura and later Mathura. In the 6th century BCE Mathura became the capital of the Surasena mahajanapada.The city was later ruled by the Maurya empire (4th to 2nd centuries BCE) and the Sunga dynasty (2nd century BCE). It may have come under the control of Indo-Greeks some time between 180 BCE and 100 BCE. It then reverted to local rule before being conquered by the Indo-Scythians during the 1st century BCE. Mathuran art and culture reached its zenith under the Kushan dynasty which had Mathura as one of their capitals, the other being Purushapura (Peshawar). The dynasty had kings with the names of Kujula Kadphises, Kanishka, Huvishka and Vasudeva I. Mathura school has been developed under the Kushans and was a divert continuation of the old Indian art of Bharhut and Sanchi. Whereas Gandhara school is completely different and has Graeco technique.