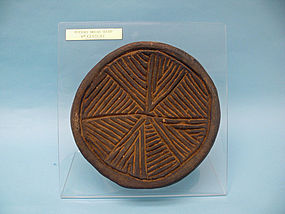 Please refer to our stock # 1871 when inquiring.
Click to view additional online photographs

Byzantine Pottery read Stamp, 6th Century, found in the Holy Land. Pottery stamp is particularly large, suitable for stamping whole loaves. Surface incised with a pattern that facilitated the breaking of the bread into small pieces. Excellent condition custom mounted and labeled. Diameter 9 1/4". Ex: Arieh Klein, Jerusalem. According to Archaeology at Brown University, very little has been written on bread stamps as an artifact category, with the majority of scholarship dealing with Christian stamps used for the eucharist, and other types of bread distributed during holy days in the Eastern rite up to this day. Stamping bread however has a long history, with New Kingdom frescoes in Egypt attesting to the practice some 3500 years ago, and Greek, Roman, Byzantine, and Islamic examples appearing in art and archaeology, from the variety of bread stamps discovered over the years to even the stamped bread itself from Pompeii. Why stamp bread? Outside of Christian ecclesiastic usage bread was stamped, as were terracotta lamps, tiles, bricks, and amphorae, to indicate the producer, or to attest to the magistrate responsible for their production. This could be particularly important in cases where bread was being distributed to the people as a political act. In addition during Pre-Christian periods bread was stamped with the symbols of various deities and given during religious festivals associated with those gods and goddesses. Lastly some stamps are thought to be purely decorative in nature. Stamps such as this, and even more those with personal names attached, provide important insights into the day to day lives of people in antiquity. The food they ate, its significance to them, and a material reminder of the very human nature of the work that archaeology undertakes is all encoded in objects such as this terracotta stamp.
Similar Items from this seller