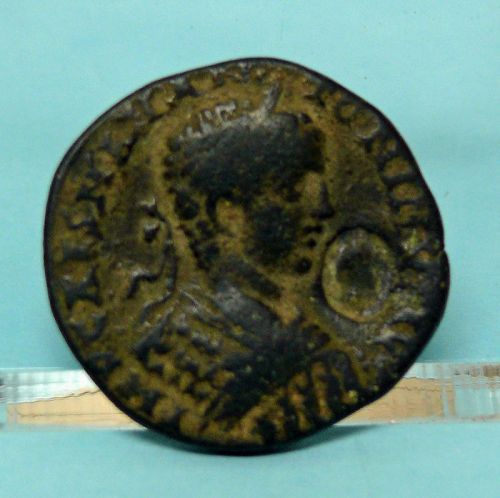 Please refer to our stock # 3347 when inquiring.
Click to view additional online photographs

Bronze City Coin of Tyre, Head of Caracalla, 198 - 217 CE. 1 1/8" diameter. Ex: B. Rhodes collection, Florida. Caracalla, Latin: Marcus Aurelius Severus Antoninus Augustus; 4 April 188 – 8 April 217), formally known as Antoninus ruled as Roman emperor from 198 to 217 AD. He was a member of the Severan dynasty, the elder son of Septimius Severus and Julia Domna. Co-ruler with his father from 198, he continued to rule with his brother Geta, emperor from 209, after their father's death in 211. He had his brother killed later that year, and reigned afterwards as sole ruler of the Roman Empire. Caracalla's reign featured domestic instability and external invasions by the Germanic peoples. The ancient sources portray Caracalla as a tyrant and as a cruel leader, an image that has survived into modernity. Dio Cassius (c. 155 – c. 235) and Herodian (c. 170 – c. 240) present Caracalla as a soldier first and as an emperor second. In the 12th century, Geoffrey of Monmouth started the legend of Caracalla's role as the king of Britain. Later, in the 18th century, the works of French painters revived images of Caracalla due to apparent parallels between Caracalla's tyranny and that ascribed to Louis XVI of France (r. 1774–1792). Modern works continue to portray Caracalla as an evil ruler, painting him as one of the most tyrannical of all Roman emperor.