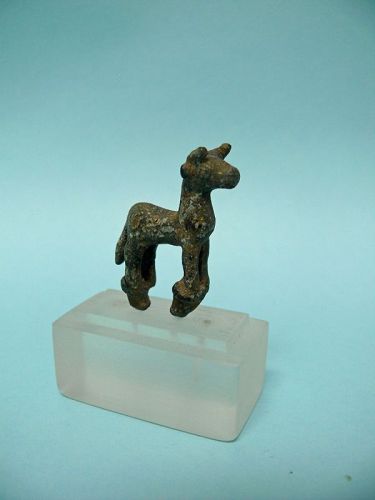 Please refer to our stock # 3345 when inquiring.
Click to view additional online photographs

Iron Age Bronze Miniature Bull, on custom stand, ca 900 BCE. 1 3/4", 1 1/4" x 1/2", on stand 2 1/2" high. Ex: B. Rhodes collection. In excellent condition. The Iron Age is the final epoch of the three-age division of the prehistory and protohistory of humanity. It was preceded by the Stone Age (Paleolithic, Mesolithic, Neolithic, and Chalcolithic) and the Bronze Age. The concept has been mostly applied to Europe and the Ancient Near East, and, by analogy, also to other parts of the Old World. The three-age system was introduced in the first half of the 19th century for the archaeology of Europe in particular, and by the later 19th century expanded to the archaeology of the Ancient Near East. Its name harks back to the mythological "Ages of Man" of Hesiod. As an archaeological era it was first introduced for Scandinavia by Christian Jürgensen Thomsen in the 1830s. By the 1860s, it was embraced as a useful division of the "earliest history of mankind" in general and began to be applied in Assyriology. The development of the now-conventional periodization in the archaeology of the Ancient Near East was developed in the 1920s to 1930s. As its name suggests, Iron Age technology is characterized by the production of tools and weaponry by ferrous metallurgy (ironworking), more specifically from carbon steel.
Similar Items from this seller