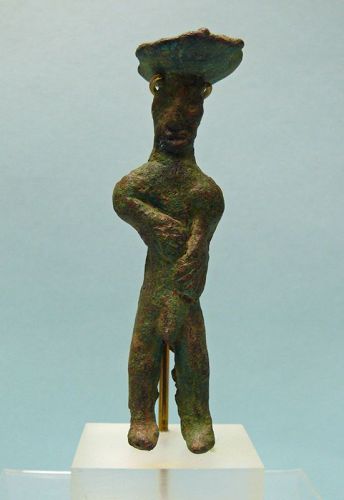 Canaanite Bronze Figure of a Diety

Please refer to our stock # 3302 when inquiring.
Click to view additional online photographs

From the Age of the Patriarchs. Splendid Middle Bronze Age II, Bronze Figure of a Diety with horns, Canaan ca. 2100 - 1550 BCE. Strong facial features with deep set eyes and long beard. Depicted in the nude with pronounced nipples, arms raised forward and small rounded feet. 3 1/2" x 1" x 1", on stand 4 1/4" high. In excellent condition. For example see Canaanite Gods in Metal: An Archaeological Study of Ancient Syro-Palestinian Figures, by Ora Negbi, Institute of Technogology, Tel Aviv University, 1976. Canaanite religion was strongly influenced by their more powerful and populous neighbors, and shows clear influence of Mesopotamian and Egyptian religious practices. Like other people of the Ancient Near East Canaanite religious beliefs were polytheistic, with families typically focusing on veneration of the dead in the form of household gods and goddesses, the Elohim, while acknowledging the existence of other deities such as Baal and El, Asherah and Astarte. Kings also played an important religious role and in certain ceremonies, such as the hieros gamos of the New Year, may have been revered as gods. "At the center of Canaanite religion was royal concern for religious and political legitimacy and the imposition of a divinely ordained legal structure, as well as peasant emphasis on fertility of the crops, flocks, and humans.