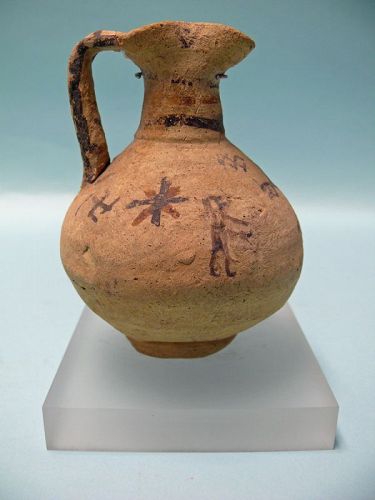 Please refer to our stock # 3237 when inquiring.
Click to view additional online photographs

Guest Book
$750.00
Cypriot Pottery Trefoil Oinochoe with geometric shpaes and ancient Sanskrit Swastika symbol meaning "well-being." Additional stylized figure of a bird and a stick figure of a human. ca. 750 - 475 BCE. In excellent condition. 5" x 4" x 4". According to BBC news, In the ancient Indian language of Sanskrit, swastika means "well-being". The symbol has been used by Hindus, Buddhists and Jains for millennia and is commonly assumed to be an Indian sign. Early Western travellers to Asia were inspired by its positive and ancient associations and started using it back home. By the beginning of the 20th Century there was a huge fad for the swastika as a benign good luck symbol. In his book The Swastika: Symbol Beyond Redemption? US graphic design writer Steven Heller shows how it was enthusiastically adopted in the West as an architectural motif, on advertising and product design. "Coca-Cola used it. Carlsberg used it on their beer bottles. The Boy Scouts adopted it and the Girls' Club of America called their magazine Swastika. They would even send out swastika badges to their young readers as a prize for selling copies of the magazine," he says. It was used by American military units during World War One and it could be seen on RAF planes as late as 1939. Most of these benign uses came to a halt in the 1930s as the Nazis rose to power in Germany. The Nazi use of the swastika stems from the work of 19th Century German scholars translating old Indian texts, who noticed similarities between their own language and Sanskrit. They concluded that Indians and Germans must have had a shared ancestry and imagined a race of white god-like warriors they called Aryans. This idea was seized upon by anti-Semitic nationalist groups who appropriated the swastika as an Aryan symbol to boost a sense of ancient lineage for the Germanic people.