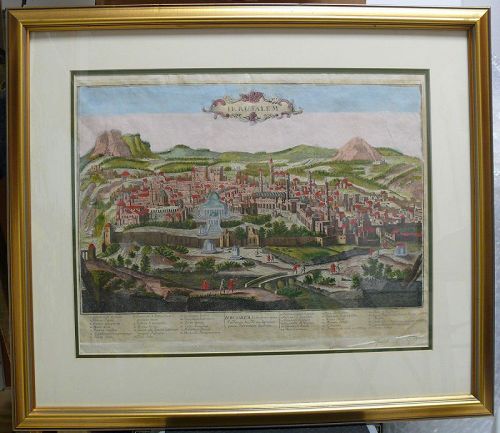 Please refer to our stock # 3234 when inquiring.
Click to view additional online photographs

18th Century Copper engraving of Ancient Jerusalem. Previously owned and autographed in English and Hebrew by Teddy Kollek, first mayor of unified Jerusalem. Map is 16" x 20", frame is 24" x 28". In excellent condition. Theodor "Teddy" Kollek, May 1911 – 2 January 2007, was an Israeli politician who served as the mayor of Jerusalem from 1965 to 1993, and founder of the Jerusalem Foundation. Kollek was re-elected five times, in 1969, 1973, 1978, 1983 and 1989. After reluctantly running for a seventh term in 1993 at the age of 82, he lost to Likud candidate and future Prime Minister of Israel Ehud Olmert. During his tenure, Jerusalem developed into a modern city, especially after its reunification in 1967. He was once called "the greatest builder of Jerusalem since Herod.