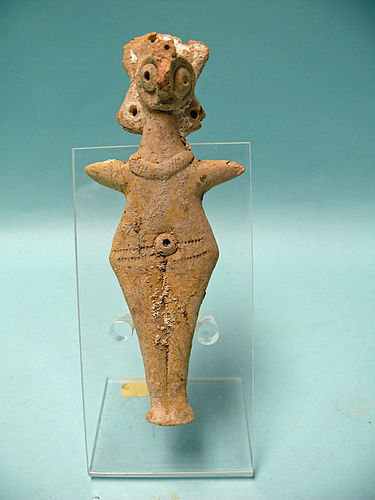 Please refer to our stock # 3183 when inquiring.
Click to view additional online photographs

Syro Hittite Terracotta Astarte / Goddess, ca. 2nd - 1st Millennium BCE. Some restoration as seen in images, encrustation due to age and some chips due to use. 5 1/2" x 2 1/4" x 1". Ex: Archaeological Center Ltd., Jerusalem. According to Susan Ackerman of the Jewish Women’s Archives, Astarte is the Greek form of the name Ashtart, who, along with Asherah and Anath, was one of the three great goddesses of the Canaanite pantheon. In Canaanite religion she was associated primarily with love and fertility, playing the role of divine courtesan, for example, in mythological texts from the Late Bronze Age (c. 1550–1200 b.c.e.) city-state of Ugarit (in western Syria). Texts from the middle and late first millennium b.c.e., by equating Astarte with the Greek goddess of love, Aphrodite, further indicate Astarte’s character as a goddess of sexual love. In biblical Hebrew the noun astarot, derived from the divine name Ashtart / Astarte, means “increase, progeny,” an indication of Astarte’s fertility functions. Also, in Egypt Astarte is known as a goddess of fertility, as she, along with Anath, is called one of “the great goddesses who conceive but do not bear.” Although they are not as well-known as her fertility characteristics, Astarte also has associations with war, shown in several Egyptian representations in which she carries weapons of war and in descriptions in both Egyptian and Ugaritic texts that characterize her as a warrior goddess. In 1 Sam 31:10, the armor of the dead King Saul is taken by the Philistines to the temple of Astarte, and this may further indicate the goddess’s warrior characteristics. Moreover, Astarte, like both her Greek counterpart Aphrodite and her Mesopotamian equivalent, the goddess Ishtar, has astral features. She is labeled the “lady of heaven” in several second-millennium B.C.E. Egyptian texts, and in the first-millennium B.C.E. inscription of Eshmunazor, she is called “Astarte of the highest heavens.” In Phoenician Sidon, the city most associated with the goddess’s cult (see Judg 10:6; 1 Kgs 11:5, 33; 2 Kgs 23:13), her sacred precinct is called “highest heavens.” Phoenician sources also report Astarte’s identification with Venus, the morning and evening star. In the Hebrew Bible the worship of Astarte is repeatedly condemned: twice in Judges the Israelites are punished for straying after the god Baal and “the Astartes” (Judg 2:13–14; 10:6–7); the people are similarly castigated for Astarte worship twice in 1 Samuel (7:3–4; 12:10); Solomon is thrice criticized for introducing the cult of Astarte into Jerusalem during his tenure as king (1 Kgs 11:5, 33; 2 Kgs 23:13); Jeremiah castigates the people for making offerings to the queen of heaven, a goddess who most probably represents a syncretism of Canaanite Astarte and Mesopotamian Ishtar (Jer 7:18; 44:17–19, 28). Nevertheless, the very fact of these multiple condemnations is evidence that, for at least some ancient Israelites, the cult of Astarte held great appeal. Although our sources do not provide enough information to identify definitively which Israelites were particularly attracted to the worship of Astarte or the reasons for their attraction, it is possible that some devotees were compelled by the presence of a female divine figure in an otherwise male-dominated religious environment.