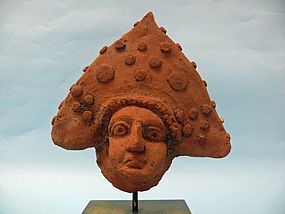 Roman Pottery Head of a Man with Triangular Hat

Please refer to our stock # 2073 when inquiring.
Click to view additional online photographs

$575.00
Roman Terracotta Male Head with Triangular Hat from a Frieze segment, circa 2nd - 3rd Century CE. Bulbous eyes with pouting lips and large nose. Head approximately 5 1/2" high. Intact and in excellent condition. Ex: Hoffman collection, Berlin Germany. Some of the earliest descriptions of a seamans' dress appears to date from a few years after the Roman invasion of Britain (55 BCE) An order that the sails of longboats in the Roman fleet were to be dyed light-blue to match the color of the sea and that their crew were to wear clothing of the same color to lessen the chances of the boats being seen by an enemy or hit by archers. Most commonly worn by military and naval officers, the classic Tricorn Hat (three-cornered) hat added function to form: the hat acted as an early umbrella via its brim-forming gutters that tilted rain away from the wearer's face. For women in the 18th century, the hat was an icon of wealth.