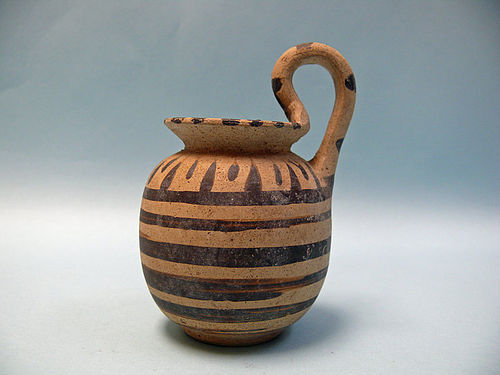 Please refer to our stock # 2069 when inquiring.
Click to view additional online photographs

$375.00
Small Daunian Pottery High Handle Juglet, Greeks in Southern Italy, circa 350 BCE. With several brown encircling bands, wide mouth and shepherds staff handle. Comb motif 4" high. Intact and in excellent condition. Ex: Christie's South Kensington. Published: Ceramiques Antiques de Grece et d-Italie dans le patrimoine liegeois, exhibition catalogue, Liege, 1987, p. 91, no. 128; and De Warande, Grieks & Italisch Aardewerk, Turn, 1986, p. 122, coll. 251. Daunian pottery is a genus of Dauni ceramic produced in today's Italian provinces of Bari and Foggia. The pottery was created by the Dauni, a tribe of the Iapygian civilization who came from Illyria. Daunian pottery was mainly produced in the regional production centers of Ordona and Canosa di Puglia, being produced since around 700 BC. The early paintings on the pottery show the vessels with geometric patterns. The ceramics were hand-formed. They consisted of red, brown or black earth color applied with the decor. Diamonds, triangles, circles, crosses, squares, arcs, swastika and other forms of art were painted on them. The development of Daunian pottery forms is independent of the first Greek ceramics. Typical Daunian pottery include the Askos, hopper vessels and bowls with loop handles. Striking are often manual, or anthropomorphic Protomen to the sides and handles of the ceramics attached to or reproduced graphically. From the 5th century BC, Daunian pottery is influenced by the Greek forms to an extent that crude human, bird and plant figures are depicted on the pottery. From 350 BC-250 BC the decorative forms change even further.