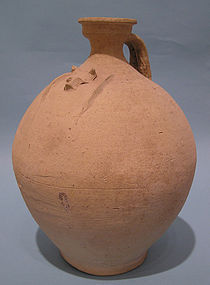 Please refer to our stock # 2008 when inquiring.
Click to view online photographs

Found in the Holy Land, Ancient Persian Buff Pottery Decanter with animal head as central figure. ca. 586 - 330 BCE. Intact with some earthen encrustation due to age. In excellent condition. 11" high. Ex: David Hacohen collection, Israel. David Hacohen (born 20 October 1898, died 19 February 1984) was an Israeli politician who served as a member of the Knesset between 1949 and 1953, and again from 1955 until 1969. Born in Gomel in the Russian Empire (today in Belarus), Hacohen was educated at a heder, before making aliyah to Ottoman-controlled Palestine in 1907, where he attended Herzliya Hebrew High School. In 1916 he became a member of the Ottoman Army during World War I. Between 1919 and 1923 he studied law and economics in London. When he returned to Palestine, he was appointed Director of the Office of Public Works and Planning, which later became Solel Boneh. He also became a member of Ahdut HaAvoda and later Mapai, as well as the Haganah. During World War II he was an officer in the British Army, but following the war he was arrested by the British authorities during Operation Agatha in 1946. In 1949 he was elected to the first Knesset on the Mapai list. He was re-elected in 1951 elections, but resigned from the Knesset on 1 December 1953 and served as the Israeli envoy to Burma until 1955. That year he was returned to the Knesset on the Mapai list, and was subsequently re-elected in 1959, 1961 and 1965, by which time Mapai had formed the Alignment alliance with Ahdut HaAvoda. He lost his seat in the 1969 elections, and died in 1984 at the age of 85.