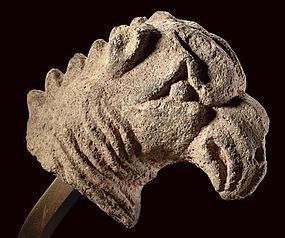 Roman Basalt Head of a Mythical Griffin from Syria

Please refer to our stock # 1997 when inquiring.
Click to view additional online photographs

$3,900.00
Found in Syria, Roman stylized head of Griffin with deep eye sockets. With bulging eyes, hooked beak, and spiky mane. Folds on neck and above eyes. Basalt is the most common type of solidified lava; a dense dark gray fine-grained igneous rock that is composed chiefly of plagioclase feldspar and pyroxene. Circa 2nd Century C.E. Head is 6 1/2: high attached on custom stand. Ex: Christie's New York, Private Japanese collection, 1980s. Griffin-type creatures combining raptor heads and mammalian bodies were depicted in the Levant, Syria, and Anatolia in the Middle Bronze Age dated at about 1950-1550 BC. Early depictions of griffin-types in Ancient Greek art are found in the 15th century BC frescoes in the Throne Room of the Bronze Age Palace of Knossos, as restored by Sir Arthur Evans. Bird-mammal composites were a decorative theme in Archaic and Classical Greek art, but became quite popular in the 6th and 5th centuries BC, when the Greeks first began to record accounts of the "gryps" creature from travelers to Asia, such as Aristeas of Proconnesus. In Central Asia, the griffin image was included in Scythian "animal style" artifacts of the 6th–4th centuries BCE, but no writings explain their meaning.