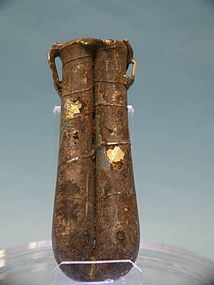 Please refer to our stock # 1987 when inquiring.
Click to view online photographs

$275.00
A Roman dark green glass double balsamarium with a glass thread spiraling horizontally around upper body and applied handles reaching from shoulder to rim. Roman ca. 2nd - 3rd century C.E. Found in the Holy Land. 4" high. A balsamarium is an ancient vessel for holding balsam, a sweet smelling oil or soothing ointment. Ex: Archaeological Center, Tel Aviv Israel. According to Mark Taylor & David Hill of Roman Glassmakers in the UK, although glass as a workable material has been traced to Sumerian sites in Mesopotamia which date from the 23rd century BC, and despite the great skill in glassmaking techniques practiced by the Egyptians and Syrian; the technique of blowing glass into light and strong vessels was not invented until the middle of the 1st century BC, probably in the region of Syria. The westward migration of glassmakers from eastern Mediterranean lands ensured the rapid spread of glassblowing across the Roman Empire: through Italy, Switzerland, Germany notably along the river Rhine centered around Cologne, France and the Iberian Peninsula.