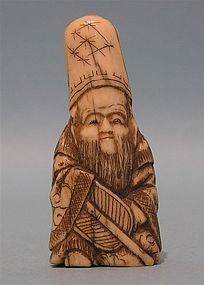 Please refer to our stock # 1983 when inquiring.
Click to view online photographs

$300.00
Miniature Ivory okimono of Fukurokuju, Japanese god of happiness, wealth, and longevity from the Edo Period, circa 1860s. Pleasing facial features, elongated forehead, long whiskers, and shortened legs. 1 3/4" high. Fukurokuju is one of the Seven Lucky Gods in Japanese mythology. It has been theorized that he is a Japanese assimilation of the Chinese Three Star Gods (Fulushou) embodied in one deity. Most related in appearance to the Chinese star god Shou, he is the God of wisdom and longevity. According to some, before attaining divinity, he was a Chinese hermit of the Song Dynasty and a reincarnation of the Taoist god Xuanwu. It is said that during his human incarnation, he was a sennin; a philosopher who could exist without eating food. Fukurokuju probably originated from an old Chinese tale about a mythical Chinese Taoist hermit sage renowned for performing miracles in the Northern Song period (960 and 1279). In China, this hermit (also known as Jurōjin) was thought to embody the celestial powers of the south polar star . Fukurokuju was not always included in the earliest representations of the seven in Japan. He was instead replaced by Kichijōten (goddess of fortune, beauty, and merit). He is now, however, an established member of the Seven Lucky Gods.