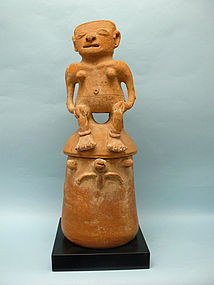 Please refer to our stock # 1946 when inquiring.
Click to view additional online photographs

$2,900.00
Rio Magdalena Pottery Burial Urn of a Female riding a turtle, Colombia ca. 1200 - 1500 CE. Cylindrical body with a stylized turtle projecting on the front, arms out-stretched, four lug handles encircling the shoulder. Surmounted by a domed lid with a seated female figure on top with slender arms and hands outspread on the knees, the face with ears and septum pierced for ornaments. In excellent condition. 24 3/4" high on custom stand. Pottery Urn is 23" x 8" x 11" Ex: Sotheby's New York. Due to its geographical position in the north of South America, the Magdalena River was since precolumbian times a route towards the interior of today Colombia and Ecuador. Several Carib speaking peoples such as the Panche and the Yariguí ascended through the western bank of the river, while its eastern portion was inhabited by the Muisca civilization, which called the river 'Yuma'. Likewise, the Spanish conquistadores who arrived to today's Colombia early in the 16th century used the river to push to the wild and mountainous inland after Rodrigo de Bastidas discovered and named the river on April 1, 1501. During the Spanish colonization of the Americas, the river was the only transport link communicating Bogotá with the Caribbean Sea port Cartagena de Indias and thus with Europe.