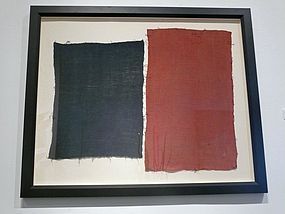 Please refer to our stock # 1942 when inquiring.
Click to view online photographs

$950.00
Brilliant Proto Nazca blue and red burial textile panels framed in one shadow box (detail shown.) Southern Coast of Peru (ca. 400 BCE - 01 CE) Frame is 34 1/2" high x 41 1/2" wide. In excellent condition. The Nazca culture (also Nasca) was the archaeological culture that flourished from 400 BCE to 800 CE beside the dry southern coast of Peru in the river valleys of the Rio Grande de Nazca drainage and the Ica Valley (Silverman and Proulx, 2002). Having been heavily influenced by the preceding Paracas culture, which was known for extremely complex textiles, the Nazca produced an array of beautiful crafts and technologies such as ceramics, textiles, and geoglyphs (most commonly known as the Nazca lines). They also built an impressive system of underground aqueducts, known as puquios, that still function today. The Nazca Province in the Ica Region was named for this people. Nazca society developed during the Early Intermediate Period and is generally divided into the Proto Nazca (phase 1, 400 BCE – 011 CE), the Early Nazca (phases 2–4, 01–450 CE), Middle Nazca (phase 5, 450–550 CE) and Late Nazca (phases 6–7, 550–750 CE) cultures (Vaughn, 2006). The Nazca are also known for their technically complex textiles. The textiles were most likely woven by women at habitation sites from spun cotton and wool (Silverman and Proulx, 2002). The textiles would have been made using a backstrap loom. This is similar to the way textiles are made in the region today (Silverman and Proulx, 2002). Textiles were woven with the common motifs earlier than they appeared painted on pottery. The dry desert has preserved the textiles of both the Nazca and Paracas cultures, which comprise most of what is known about early textiles in the region. Shawls, dresses, tunics, belts, and bags have been found through excavations at Cahuachi and elsewhere. Many textiles associated with the Nazca culture are garments that were included with grave goods found at burial sites. Almost every body found is wrapped (sometimes partially) in a textile as a part of burial ritual. These textiles are found with partial burials as well. Often piles of bones are found wrapped in a textile garment (DeLeonardis, 2000). The deposits of dresses and shawls contained both high-status garments (with feathers, painting, embroidery) and plain garments, suggesting different social roles or responsibilities. Mary Frame's extensive analysis of textiles from Cahuachi has revealed more about Nazca women. She noted that although the women are rarely recognized in the archaeological record, they had ready access to high-status materials and the right to wear potent imagery on their garments (Frame, 2003), which gave an indication of their status. A large portion of dresses were found portraying birds with speckled bodies, double-headed serpentine figures, and anthropomorphic figures.