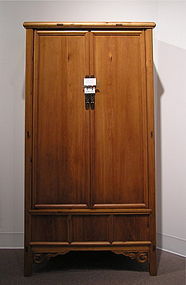 Please refer to our stock # 1937 when inquiring.
Click to view additional online photographs

$900.00
Qing Dynasty tapered Noodle Cabinet, circa 1880, with two inner shelves, two inner drawers, and a hidden compartment for bottom. Beautiful finish and in excellent condition. 77.5" high x 38" x 22". According to the Silk Road Collection, the history of crafting and using Chinese furniture began during the first millennium AD when some Chinese decided they would be more comfortable sitting on chairs instead of squatting on the floor. Before this time, the Chinese usually conducted their lives and their business at floor level, as many Asian cultures did and some still do today. Westerners may have used furniture before the Chinese, but once the Chinese cabinetmakers began crafting cabinets, chairs and tables they learned their craft and the intricacies of furniture making quickly. They learned to construct superbly designed and proportioned pieces without using nails, and with only a minimal use of dowels and glue. One of their greatest accomplishments are cabinets. The architecture of a traditional Chinese home made no allowances for built-in closets. Closets are a Western innovation, and are still a rarity in Chinese societies from Hong Kong to Taipei to Beijing. Also, the Western concept of an armoire or a wardrobe cabinet did not exist in the Ming Dynasty China, as the Chinese would never hang clothes vertically inside a cupboard. Instead clothes and bed linens were laid flat inside a chest or cabinet, or hung on wooden racks. Dynastic robes were folded and stacked horizontally, rather than vertically on hangers. Round-cornered cabinets tended to have rounded sides and overhangs, and the legs were slightly splayed, giving it a tapered A-frame silhouette, creating the impression of upward movement. They were crafted with removable doors with wooden pivots at each end and a removable center post. The doors could then be slotted directly into the frame of the cabinets, resulting in a design with extremely clean lines. Wooden pivots or hinges allowed the doors to be removed easily, which gave the Chinese easy access for storing large objects or laying clothes lengthwise. This functional innovation was intended to reduce the labor required to manage fussy garments. Besides these removable stiles, the genius in its design lies in the way the doors neatly swivel on rounded wooden pegs.