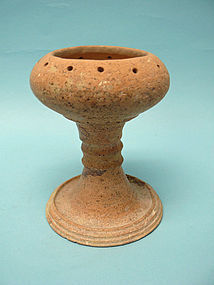 Please refer to our stock # 1772 when inquiring.
Click to view additional online photographs

Iron Age II Fenestrated Pottery Chalice, ca. 8th Century BCE. Time of Omri, father of King Ahab who was husband to Jezebel. Found in the Holy Land. Chalice stands on wide elaborate foot with long slender neck. Wide mouth of drinking vessel surrounded by perforated holes, believed to be from a later date. 5 1/2" high x 4 1/8' diameter and in excellent condition. According to Boston University, Iron II (1000-550) witnessed the rise of the states of Judah and Israel in the tenth-ninth century. These small principalities exercise considerable control over their particular regions due in part to the decline of the great powers, Assyria and Egypt, from about 1200 to 900. Beginning in the eighth century and certainly in the seventh century, Assyria reestablishes its authority over the eastern Mediterranean area and exercises almost complete control. The northern state of Israel is obliterated in 722/721 by King Sargon and its inhabitants taken into exile. Judah, left alone, gradually accommodates to Assyrian control, but towards the end of the seventh century it does revolt as the Assyrian empire disintegrated. Judah's freedom was short-lived, however, and eventually snuffed out by the Chaldean kings who conquered Jerusalem and took some of the ruling class into exile to Babylon. During the period of exile in Babylon, the area, particularly from Jerusalem south, shows a mark decline. Other areas just north of Jerusalem are almost unaffected by the catastrophe that befell Judah.